Sandy Hollow Heritage Park, 42 acres of preserved open space, much as it was in 1777, allows public access for passive recreation to a portion of the Brandywine Battlefield National Historic Landmark. Established in 2002, the park has a 1.1 mile asphalt path for pedestrians. An interpretive sign acknowledging the historic event is located along the path.

This Battlefield is viewed as hallowed ground due to the sacrifices of the participants on both sides of the conflict. As such, it is intended to be used as a place of reflection, historical education and passive recreation. It is meant to be enjoyed by all. However, unless approved by the Board of Supervisors, no events or organized activities will be allowed at Sandy Hollow Heritage Park in order to maintain the true intent of the Brandywine Battlefield National Historic Landmark.

5pm, Sandy Hollow: The Second American Defense
The first line of Colonial defense, formed near the Birmingham Friends Meetinghouse, broke in confusion under heavy fire. The most significant fighting took place along Birmingham and Wylie Roads in the vicinity of the Birmingham Meetinghouse and what is now Sandy Hollow Heritage Park. The Continental Army fought valiantly, reforming on high ground in a wavering but often amazingly courageous defense. It was “disputed muzzle to muzzle.” The line gave way five times, reforming and pushing farther back.

The high ground of Sandy Hollow Heritage Park marks the “sunset stand” as slowly the Colonials were driven back by overwhelming forces and firepower, dusk was closing in, ammunition was low, and many of the three and four pounder cannons had been lost. Both sides were exhausted by long marches and a nearly 2 hour battle. The Continental left flank finally gave way and Greene's men held the Sandy Hollow area, while a fighting retreat began toward Dilworthtown.

There were substantial casualties. Many of the dead on both sides were buried near where they fell and in the Birmingham burying grounds. While the battle was a significant loss for Gen. Washington’s army, it was a turning point in the war due to the strong resolve it fostered among the Continentals to carry on the fight for freedom. 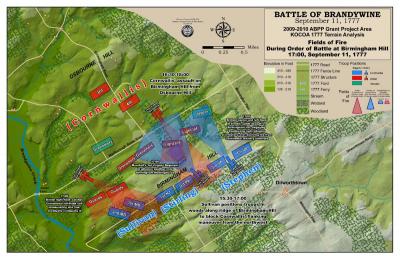 The common grave of British and American soldiers who fell at the Battle of the Brandywine is located in the Peace Garden in the burial ground behind the Birmingham Friends Meetinghouse.