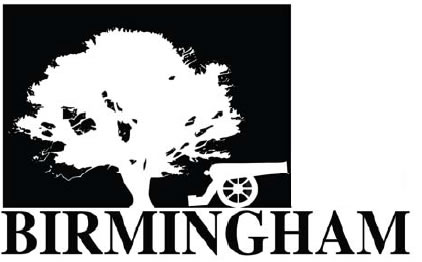 Long before Europeans set foot in the New World, people referred to as Indians, Native Americans, or First Americans roamed across the North and South American continents. These people likely migrated from the Old World across the 50-mile Bering Sea between the USSR and Alaska approximately 14,000 years ago (when sea level was considerably lower than it is today, exposing a “land bridge” between the two continents). Archeologists refer to these early immigrants as Paleo Indians, who lived in small, nomadic groups and hunted big game such as the wooly mammoth, musk ox, and bison with stone-tipped spears. About 9,000 years ago, “Archaic” Indians based their subsistence strategies on seasonal hunting and food-gathering rounds, and learned to make fire and cook foodstuffs in bowls and pots they carved out of soapstone. By about 1,000 BC, “Woodland” Indians began living in small villages or hamlets, and had invented ceramics they made from clay along the riverbanks. Gradually the bow and arrow took the place of the spear, making the procurement of smaller game such as the white-tailed deer and antelope possible. When the first European colonists set foot on North American shores, they met dozens of Indian tribal groups living in large villages scattered across the landscape, growing their own crops in agricultural fields and processing the grain with stone hoes, mortars, pestles, and milling stones. While fishing, hunting, and foraging supplemented their agricultural activities, corn, beans, and squash formed the major part of their diet.

In southeastern Pennsylvania, the people who greeted the colonists were the Lenape (also known as the Delaware, a name given to them by the Europeans). The Lenape lived primarily in large, oval-shaped long houses on wide floodplains of major streams and tributaries over a vast region including parts of Pennsylvania, Delaware, New York, and New Jersey. In Chester County, there were at least two such hamlets—the Northbrook Site at Northbrook, and Queonemysing, located on the Brandywine just above the Delaware state line. By the 1750s, the Lenape had been forcibly removed to reservations in Oklahoma and Ohio. At least 70 Indian sites are recorded in the Pennsylvania Historical and Museum Commission filing system for Birmingham Township, most of which are small campsites or hunting stations of the Archaic time period that have been discovered and reported by collectors. No Indian site of any time period in the township has been subjected to professional archeological study.

Birmingham Township is the oldest township in Chester County, dating to 1684 when William Brinton secured two patents for 840 acres from William Penn near the village of Dilworth (Dilworthtown). Brinton was the first of many Quakers to escape persecution in England by taking advantage of the opportunities presented by William Penn’s “Holy Experiment,” and Quaker influence is still prevalent among township residents today. Birmingham Township received its name because Brinton hailed from Birmingham, England. The early settlers quickly began building houses from timber and stone, and they established a meeting house (first built of logs but later torn down and built more substantially of stone), school, and burying ground along Birmingham Road near Street Road. Each of these is still extant. In 1686, the settlement organized into a municipal district of 6.4 square miles with town meetings one of the central features of this representative form of government.

Although appearing to be a relatively flat landscape, with gently rolling open fields and broad vistas, Birmingham Township was anything but that at the time of the first settlements. Clearing agricultural lands was backbreaking work, involving felling trees either with whipsaw and axe or by controlled fires. Except where the Lenape had cleared small plots to grow subsistence crops, the land was densely forested and in some places deeply incised by tributaries of the Brandywine and the Brandywine itself, making overland travel difficult. The few roads that provided transportation corridors were mere rutted trails traversing the countryside where Indians had previously worn paths. The Brandywine River also presented obstacles, and fords were established at several points in the township along the stream, including two at Chadd’s Ford and one each at Brinton’s Ford (near Wylie Road), Painter’s Ford at Pocopson, and Wistar’s Ford at Lenape. With the Brandywine River forming the western boundary of Birmingham Township, mills for processing grain, grist, and logs sprang up almost overnight. This also entailed the construction of dams and head and tail races so that enough “head” could be generated to turn the water wheels. By the end of the 18th century, Birmingham Township boasted some of the largest and most profitable mills in Chester County. The village of Dilworth(town) became a thriving center of commerce during this period, boasting a blacksmith shop, wheelwright shop, harness and saddlery shop, cheese factory, barrel and keg factory, and a general store all located at this crossroads.

Birmingham Township is perhaps best noted for its association with the Battle of the Brandywine of September 11, 1777, the most significant land battle of the American Revolution. The township is entirely subsumed within the Brandywine Battlefield National Historic Landmark boundary, the only municipality so positioned. On that fateful day in 1777, some 13,000 British and Hessian soldiers outmaneuvered a similar number of George Washington’s Continentals as they tried to defend against Sir William Howe’s advance on Philadelphia. The most significant fighting took place along Birmingham and Wylie roads in the vicinity of the Birmingham Meeting. Many of the dead on both sides were buried in the Birmingham burying ground. It was at this battle that the Marquis de Lafayette joined the Continental cause and suffered a bullet wound to the leg. While the battle was a significant loss for Washington’s army, it was a turning point in the war because of the strong resolve it fostered among the Continentals to carry on the fight for freedom and ultimately prevail at Yorktown four years later. 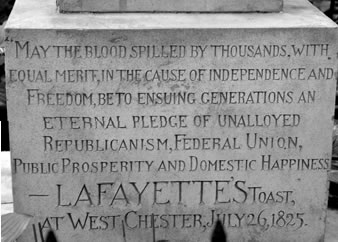 Following the war the residents of Birmingham Township turned their attention to municipal affairs, with a unique geographic anomaly one of the major results. Because the documents creating nearby Delaware County specified that the Brandywine River formed its western boundary, a small tract of land bounded by a bend in the river and the Delaware state line was technically in Chester County. Thus, Birmingham Township was divided into two discontiguous geographic entities, a situation that remains to this day. By 1856, the township had expanded to take in 1,200 acres of East Bradford Township, thus resulting in the present day configuration. In 1795, the Birmingham Library was established, the first subscription library in Chester County. In the Quaker tradition, it specialized in books on religion and philosophy.

By 1820, the population of Birmingham Township was some 323 persons, most of them of the Quaker faith. As the township grew and secular affairs consumed more time and energy of many of the residents, a rift developed in 1827 over just how involved Quakers should be in the affairs of government. Those espousing more traditional views left Birmingham Meeting and established the Orthodox Friends Meeting further south on Birmingham Road. It would be more than a century (1955) before this rift was ended.

The development of new farming technologies such as mechanized planters and reaping machines fostered considerable agricultural growth and prosperity in the middle of the 19th century. The US census data for 1850 reveals that 18
Birmingham farms were producing 3,000 bushels of wheat, 7,500 bushels of corn, and 5,800 bushels of oats on an annual basis. This period also saw the construction of most of the high-style serpentine houses in the township that are still standing today. 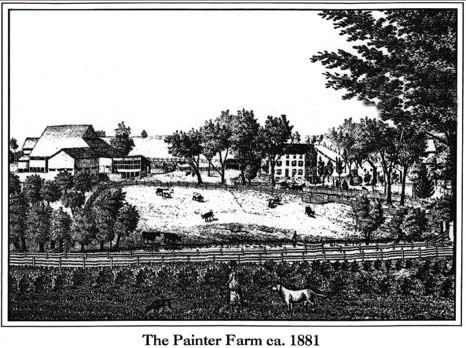 By 1879, many Birmingham Township farms had shifted their focus to dairy production. Wheat, corn, and oats were still being produced on some farms, but the average agricultural yield per farm declined during this period, even though the development of fertilizers made the land more productive than before. Township residents were prospering, but prosperity came only with hard work. Accordingly, recreation became important at the turn of the century. Birmingham Park and Lenape Park were developed in this period, the latter including a dance pavilion, restaurant, baseball fields, swimming, cricket, fishing, picnicking, and tennis facilities. So popular were these recreational parks that the Wilmington and Northern Railroad established a stop to accommodate travel to Birmingham Park. 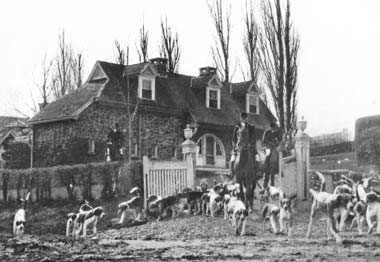 Leaving for the Hunt

View of Mather farm from bridge.

With the development of dramatic new technologies in the early 20th century, including the “horseless carriage” and the airplane, people became less dependent on the homestead to make a living. These new technologies afforded unprecedented mobility and opportunities arose that simply weren’t there before. Heretofore thriving farms either reduced their production dramatically or went out of business altogether. The once thriving mills along the Brandywine and its tributaries became silent and abandoned. One of the largest farms in Birmingham Township, the Painter Farm on Country Club Road, was converted into a country “hunting box” by Charles Mather, a real estate magnate from Philadelphia who loved to “ride with the hounds”. This period saw the beginnings of land speculation and an architectural revival, with many styles coming back in vogue, most prominently the Colonial Revival style. Later in the period, the GI Bill made it easier to own a home, and new residential developments further from the city sprang up, many following the model set by Levittown, in Bucks County. The first such development in Birmingham Township was Radley Run, begun in 1965.

Rural Suburban Enclave and the Rise of Civic Awareness: 1960 to present

With the construction of Radley Run, land use patterns in Birmingham Township would never be the same again. The “suburban model” of multiple houses built on “tracts” over what was once farmland became the pattern of choice. Previously, a house was at the center of a wide array of farm buildings, surrounded by open agricultural fields that generated subsistence and wealth. With the “suburban model”, wealth and subsistence were acquired elsewhere, and the land became a scenic vista for the house. Many such residential developments have been built in Birmingham Township since the development of Radley Run; in spite of this, much of the township still retains essentially a rural character. The presence of the Brandywine Battlefield in the township has largely been responsible for the retention of this rural character. 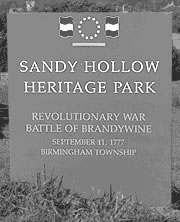 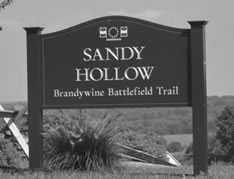 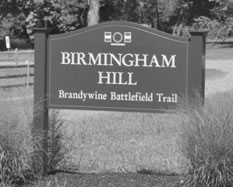 On January 20, 1961, the Brandywine Battlefield was formally designated a National Historic Landmark by the National Park Service. Such designation is granted only to historic properties that possess exceptional national significance. This federal initiative, together with the growing encroachment of suburban development in and around the battlefield, compelled Birmingham Township to adopt planning strategies of its own to promote orderly growth. The result has been a plethora of plans, policies, ordinances, and acts all designed to strike a balance between preservation and development. These efforts include a Development Policy Plan (1964); historic district designation for the village of Dilworthtown (1969); Recommended Plan:2000 (1972); expansion of the Dilworthtown Historic District (1978); and several zoning ordinances and comprehensive plans in 1978 and 1979. Each of these documents, particularly the ordinances, contains provisions to set aside open space areas, yet suburban encroachment continued apace throughout the 1970s and 1980s.

In response, several new planning documents were produced in the late 80s and into the 90s, including aCultural Resources Management Study for the Brandywine Battlefield (1989); an Open Space, Recreation, and Environmental Resources Plan (1994); and Birmingham Township Comprehensive Plan (2001). All of these documents contain recommendations for the township to consider in its planning and preservation efforts; some have been implemented, others have not. Perhaps the most important planning document produced to date is a major GIS-based study completed in 2010 and participated in by all municipalities with lands within the National Historic Landmark boundaries. Among other things, this study created a series of layered maps showing features such as historic roads, buildings and structures standing at the time of the Battle of the Brandywine, as well as troop movements superimposed on modern features such as streams, contemporary roads, and the Landmark boundary. The digital data and reports of this study are on file at the Chester County Department of Parks and Recreation.

Report on file with Birmingham Township 2001